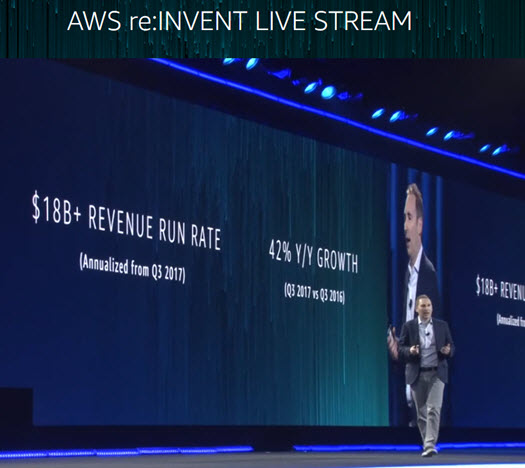 10:17 Expedia CEO –
Expedia – 22,000 employees and and ?? billion in sales
Most global diversified travel platform in the world.
55 million phone calls/year
Started as a small division inside Microsoft.
Rewrote every line of code, retired 10 millionth line of C# code.
We consider ourselves “Serial Re-inventors”.
80% of mission critical apps will move to AWS.
2000 deploys per day?
3 Reasons: Resiliency, Optimization, Performance
Acquired Travelocity and migrated to cloud. ($280 million acquisition in 2015)

Serverless / Lambda –
Aurora – fastest growing service in the history of AWS; sacle out up to 15 read replicas in 3 availability zones, autoscale available,
Oracle doubled price to run Oracle on AWS, who does that?
Preview Aurora scale out for both reads and writes (formerly scaled out for reads only). Failover in 100 milliseconds.
1st relational database to scale out to multiple data centers. Single region multi-master today, multi-region coming next year.
Preview of Aurora Serverless – so you pay only for what you use! On demand – autoscaling serverless Aurora. Pay only by the second when DB is being used.

Relational database tend to break down when you have PetaBytes or ExaBytes; and that is why they build DynamoDB.
July this year – was “Prime day” at Amazon.com, processed 3.34 Trillion Requests, 12.9 million requests per second.

Modern companies use multiple types of database, often in a single application. AWS had breadth and width of selection.

Amazon S3 is the most popular choice for “Data Lakes”.

Analytics Services:
Athena – for unprocess data such as logs
16 management framework for Big Data (like EMS/Hadoop, etc…)
RedShift – something like a DataWarehouse
Elastic Search – real time dashboards
Kinesis – Real time processing streaming data
QuickSight – Business Intelligence https://quicksight.aws/
ETL – has not existing in the cloud until they launched “GLUE” about a year ago. https://aws.amazon.com/glue/

11:07 Second customer speaker: Goldman Sachs – Analytics Users – Managing Director Roy Joseph
Has been around since 1869, almost 160 years.
1 out of 4 employees is an engineer, 1.5 billion lines of code, 700 applications.
2000 Servers in Cloud Environment.

11:18
Announcing “S3 Select” – allows you to pull out only the data and objects you need from S3.
Reduce cost of apps querying S3, filter data using standard SQL selections. Sometimes up to 400% savings!
Presto Query –
http://www.tpc.org/tpcds/ TPC-DS used for benchmarks.

Can we further extend the data lake?
Glacier – has been hard to query, hard to pull out just what you want (as above).
Announcing: “Glacier Select” – similar to “S3 Select” above (at standard or expedite sped or both, depending on your needs).

Machine Learning – should not be so black box, cryptic…
The hype and the hope here is tremendous.
“Machine learning” is the buzzword dejure.
Amazon recommendations – people may like this product – all fueled by Machine Learning
(also the Prime Air drones, speech recognition and Alexa).

It’s still early for most customers.

Three layers of the stack:
1) For expert machine learning practitioners – accustomed to building/tuning models themselves on P2/P3 instances.

With Machine Lanauge – The one constant is change
More Tenser Flow on Amazon than anywhere else, but maybe Caffe2 is the chocie, or MXNet is the best.
We will support them all. (Torch, Keras, …)

There aren’t that many ML experts in the world yet.
ML is still to complicated formost developers. Even small models consume a lot of compute time. Then it has to be tuned (quite difficult, up to millions of parameters). Developers throw up their hands in frustration. The lifting is “too-heavy”.

Original vision statement for AWS – allow any person at any company have access to same tools as the largest companies in the world.

Introducing: Amazon Sagemaker – easily build, train and deploy machine learning models.
Create your own algorithms or use built-in.
8 of 10 run two times faster than anywhere else, and 2 of them run 3 times faster.
Training is easier any “Sagemaker” than anywhere else, specify location of data in S3, and EC2 instance type; it spins it up, then when done tears down cluster. Do you change data for the model, or how to choose hyper-parameters?
Tuning parameters has been highly random. Hyper-parameter-optimization (HPO) is done for you; it spins up multiple copies of your model, then using machine learning to inform the machine learning model. This can be 1000s or even millions of parameters. You can pick some options, and do one-click of your model to production.

11:42 Announcing “DeepLens” – for “Deep Learning – High definition camera with on-bar compute, optimized, has “green grass” in it (can us Lambda triggers). For example, if it recognizes license plate, could open garage door. Can send you alert when dog jumps on the couch.

Unlikely you get the best model the first time. You have to tune. HPO (above) is the automatic tuning to improve accuracy then re-test it. Interactively picks interesting features of each model, and keeps improving accuracy; then selects best performing monitor. Single click to fully managed multi-Availabity Zone cluster.

What can you do? Train dozens and dozens of more models, gets addictive quickly. Let your imaginations run wild!
Experimenting is the best way to learn and improve your skills. Creating AWS Deep Lens – first deep learning wireless video camera, to help developers learn and test their skills.

People asked – can you do the same thing for video? Harder – because it deals with time and motion, and needs context of previous and next frames.

Announcing – “Amazon Rekognition Video” – “Video in, People, activities, and details out.”
Includes “people tracking” (using technology called skeleton modeling) to know if person is in frame or not.
It handles “real time” video as well. Service will continue to get better every month.

People were asking, how do we get our data and videos into the cloud?
Announcing – “Kinesis Video Streams” – Securely ingest and store video, audio, and other time encoded data (like RADAR).

How about language? Last year launched both Polly and Lex, but so many other things users want to do with language.
Hard to search audio, so have traditionally converted audio to text. Since it is expensive, people only pick out the most important things.

Announcing – “Amazon Transcribe” – long form automatic speech recognition, analyzes any .wav or .mp3.
Can be used for call logs, meetings, starting with English, but other languages coming in months to come.
Machine learnings adds punctuation and grammatic formatting, along with timestamps. Supports even “poor” audio, like phones and lower bit-rate audio. Coming soon: Will be able to distinguish between multiple speakers, and can add your own custom libraries and vocabularies. Then you want to take transcribed text, and translate it into other languages.

Announcing “Amazong Comprehend” – full natural language processing service. Discover valuable insights from text.
Four categories: 1) Entities, 2) Key phrases, 3) Language, 4) Sentiment
Can do “topic modeling” – look at thousands or millions of documents/articles. Can be used to group documents, or how to show them to your customers. Can do ?? documents for $1.80. (missed the number).

12;12 How NFL is using Machine Learning – Michelle McKeena_Doyle, SVP and CIO, National Football League
Largest sports club in the world.
In 1 week of games – 3 terabytes of data is collected.
Next Gen Stats Platform – giving broadcasters details stats about real-time speed, movements, distance a player has moved… Will also be available for post-game analysis. AWS is now an official technology partner with NFL and Next Gen Stats.
All this will enhance the “fan experience.” Sensors are placed on each player to provide this data.
For example, can compute Quarterback Efficiency. Can take into account field condition and weather, things that the human mind may not be able to correlate. Can look at why a play was successful and how it can be quantified.
What the offensive formation is “pre-snap”? What the defending team did? Takes key identifiers, when ball was snapped, when it passed, when it was caught, and when the tackle was made. Why? To get new insights? Show probabilities of success to various teammates. Mid play – catch probabilities are now available. Can see how good the decision making was for the quarterback.

12:24 House Band – Tom Petty 1981 song “The Waiting”
The Next phase of IOT – The Internet of Things –
Trying to get data to edge devices is hard and painful.

Device manufacturers are exciting about getting data from their own assets.

Frontier 1: Getting into the Game
Example: Want to allow you as a customer, when you want dishes to be picked up from room service, push a button. Simple straight forward Lambda triggers they want to get into IOT with.

Announcing: “AWS IoT Device Management” – helps onboard/deploy devices in bulk, example 1000s of light bulbs to multiple locations in one click, manufacturer, serial #, firmware, and query on those dimensions (to determine where to troubleshoot). Do updates over the air on part or all of your fleet of devices.

Frontier 4: Analytics – has been hard to make sense of it, but customers want to do it.

Announcing: “AWS IoT Analytics ” – cleans, processes, stores IOT device data.
Define an anlystics channel, select data to store, ingest it, configure it enrich or transform the data. It also needs other data to make it useful, e.g. a vineyard might need humidity of the soil, but need to know predicted rainfall that day before turning on irrigation. Performs ad hoc queries, sophisticated analysis, and prepares data for machine learning.

Frontier 5: Smaller Devices – take action based on data they are getting; some are big enough or expensive enough to house a CPU. But new ones have a MCU (Micro-Controller Unit), which outweighs the CPU units by 40×1. Like smoke detectors, soap dispensers… are not connected to the cloud.

Announcing: Amazon FreeRTOS – IoT connected operating system for microcontrolled-base edge devices.
Working with Texas Instruments, and other companies…
May not have connectivity to make round trip to cloud, but can connect to a “green grass” device nearby (https://aws.amazon.com/greengrass/), that has Lambda on-board.

Announcing: “GreenGrass ML Inference” – let’s you run Machine Language “at the edge”
No latency of going back to the cloud. Most will use SageMaker to bulid models, send over air to the devices.

Are you going to play? Huge penalty for companies that do not.
Amazon AWS released 1300 features this year, an 3.5 per day average.
All your competitors will be using the cloud. It’s a golden age – and we will be there every step of the way to help.