The results show you by year/month how many rows. In most cases, you will find you need to purge data prior the current month. At least on a test system, I can think of any possible use of month old orchestration trace data (or even on Production for that matter).  But if you have long-running dehydrated orhestrations you might need it).

Orchestrations write data to these tables each time they run (when Trace is enabled).

Go to SQL Agent on the SQL Server that supports your BizTalk server, check the job entitled: DTA Purge and Archive (BizTalkDTADb) 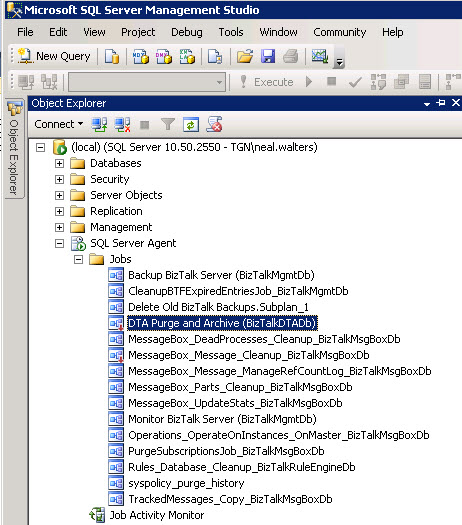 I take the original code that is there, and copy it to the line below, then comment out the code that is there with the T-SQL comment (two dashes).
Then change the second line to the parameters you want. Follow-that by running the job manually, or set it up to run on a scheduled basis.

NOTE: Running the job creates a backup, so if your DTA database is large, and you are short on disk space, you will have to make sure you find disk space for the backup to be written.

If you get odd errors, try running the command directly in a SQL query window, then the a more useful error may be displayed than what you would see in the “View History” of the SQL Agent Job.

The Parms are as follows:

However, after running it, I still saw many of the same rows there (this is on BT2010 by the way). I did some more research, found Sandro Pereira’s blog and ran the following:

You can also delete the rows of the DTA_Debug table as follows.
It has a loop to delete only a few rows at a time (you can set that number of course), so as not to fill up the TEMPDB or the log file. It’s based on my prior blog on how to safely do mass deletes in SQL server.

More stories and ideas: At my current client, the DTA database was 152GB. That database and it’s log file were taking up about 95% of the disk space on the SQL server machine. The prior BizTalk people had never turned on the BizTalk backups and purge jobs! (Oh my!) The disk on the SQL server was close to be being full (it’s a VM, so I could probably have asked for more).

I couldn’t run the full SQL Agent job called “DTA Purge and Archive (BizTalkDTADb)”. I dug into to it to see what it is running. It has a lot of protection around it about not purging until a back up is made.

Well, I couldn’t make a backup without requesting more diskspace! A lot of diskspace! So after delete the DTA_Trace above, I still had a lot of space being used tables such as:

These each has about 18 MILLION rows in them! I ran the SQL statement below, which runs the purge stored procedure WITHOUT the backup. It ran for several hours! It delete 100 rows at a time, in a loop, similar to the code I provided above.

You can watch to make sure it doesn’t fill your Log file with this command: DBCC SQLPERF(logspace)

You can check your free space in the main DTA database with this command:

This was the shrink command for the log file: