I only run three sites on it at this time.  One reason I need IIS is that my original shopping cart was written in “Classic ASP”, and I developed over 480 asp programs that I never felt like rewriting.  Many of them are now obsolete, but my first plan is to get to a new environment, then slowly upgrade the code.

I started selling a Hebrew tutorial on the internet back in about 1999.  I was a Microsoft Certified Trainer and teaching a lot of Visual Interdev classes (that was the Visual Studio tool to edit websites and .asp code).  Because of that, I decided to write my own shopping cart as a learning adventure, and it’s been very stable over the years.   When .NET first came out, i considered a re-write, but I had the attitude that “if it ain’t broke, don’t fix it”.

Anyway, that’s the background.  Here’s one of the fun issues I encountered with IIS8.  Like the code above, usually this is a set and forget operation.  At work, usually other teams configure IIS to domains, so it’s rare I play with real domains on IIS.

When I was adding my second site, I got this error. 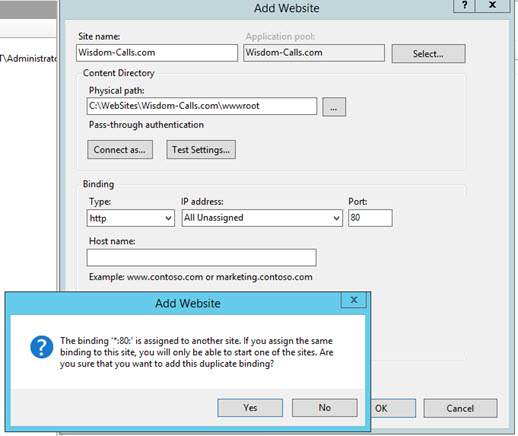 That basically means that I already had another website with no HostName, the same IP address (which was set to “All Unassigned”, that also uses Port 80.

This orcsweb blog seems to do the best job at explaining how to setup bindings for IIS (regardless of the release).

Once I put in my domain name for the “Host name” it worked fine.

I’m currently experimenting with a subdomain, such  test.Wisdom-Calls.com, so that I can have the same site on both the old and new server until I can make sure it’s working.  I’ll post back later with the results of that test.

The question that still remains is can you put a non-Domain name in the “Host Name”.  I tried “test”, and was able to add the site.  But when I went to an html file and clicked “Browse”, it loaded for just an instant as http://test/mytestprogram.asp, but then it suddenly switches to http;//test.com/mytstprogram.asp.  Test.com is a real domain owned by someone else, and the redirect to the home page: https://www.test.com/index.html.

How to Change Bindings in IIS8

To change the bindings, you mus tright click then select “Edit Bindings…”.  I have no idea why there isn’t an icon in the “Features View” tab for that. 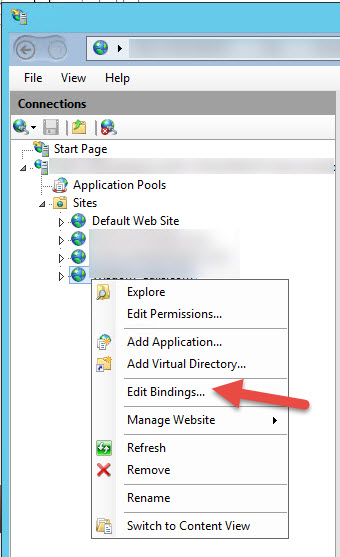 In another blog, I’ll explain how I set up GoDaddy to work with Amazon EC2 and my “Elastic IP Address”.