I was getting this strange error yesterday:

map_X_to_Y.btm: error btm1023: Exception Caught: Object reference not set to an instance of an object.

What I had done was copied a map from one project to another.  I had either not copied the schema, or I had copied the map to a different folder where it couldn’t find one of the referenced schemas.   So either I moved the map or added the missing schema, and all was well.

At first I was focusing on Functoids and possible logic errors, but then I expanded the schema(s) on the left, and noticed the following: 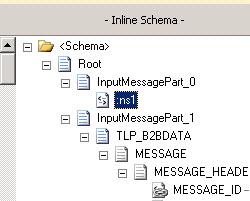 You can see in the picture above that InputMessagePart_0 was missing the schema.